The amazing life of a wandering albatross 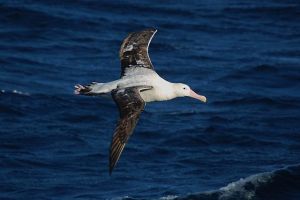 A wandering albatross in flight over the Southern Ocean. Photo: Lt Elizabeth Crapo via Wikimedia commons.

Wandering albatrosses are famous for being the largest flying bird, with a wingspan of over 3m, but their record breaking does not stop there. They can live for over 60 years and are incredibly faithful to their partners, with a “divorce rate” 140 times lower than humans! Bird continue to breed even when they are grandparents, and their young almost always come back to where they were born. New data collected recently, using the GPS technology you find in your phone, have shown that these birds travel to the moon and back 10 times during their lifetime!

A lot of work in the past 15 years has looked at whether animals, like humans, have distinct personalities. We have been studying this in the two albatross species by recording how they respond to humans or an object they have never seen before. Some birds are very aggressive whereas others are calm and show little response. Interestingly, birds inherit these behaviours from their parents and they also affect how the birds find food and how they breed. Understanding these behaviours is really important as albatrosses are the most endangered group of birds. Albatrosses can get caught in long fishing lines and drown, which has had a devastating effect on their populations. But it’s not all bad news: huge international pressure has led to changes in the way we fish and now there is hope for the future of these amazing birds.