Although the typical blue tit nest has one male and one female parent raising chicks together, the apparently harmonious family scene is actually a hotbed of deceit and conflict. Using DNA fingerprinting methods, we now know that about 11% of all young blue tits are not fathered by the male that provides them with food and care, but by another male from a nearby territory.

One idea to explain this is that all females need a male to help raise the chicks but some males are sexier than others.

A female might decide to breed with a very high quality male, maybe one that has very few parasites, is disease free and who might live to a ripe old age; all traits which are determined by their genes. However, not all females can breed with the best male, otherwise they will have to share his time when it comes to providing food for hungry nestlings. So it might be better for a female to settle for a lower quality male to help feed the chicks, but sneak matings with the higher quality male to ensure that her offspring have the best genes to maximise their survival and future success. 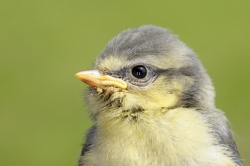 And what do males do about that? They try and stop it of course. They follow the female around when she is most fertile to prevent her sneaking off for sex elsewhere, and if they are cuckolded they might not provide quite as much parental care to the chicks as they could have done. That conflict between the sexes is common across lots of different animal groups, not just birds.